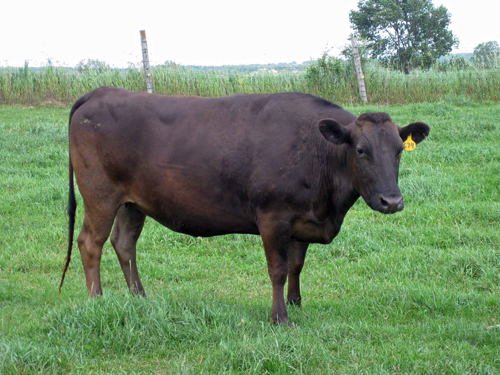 “Misako” was born on October 18, 1999 and was purchased from WKS Group. She was to be one of their foundation donors for the next generation of animals being produced in WKS Australia.

Sired by FB1615 – “Michifuku”, a sire renowned for his great meat qualities as reflected in Breedplan. “Michifuku” is a son of the famous “Monjirou”.

“Monjirou” was born on March 15, 1981 in Hyogo Prefecture. He was sold as a young bull to “Livestock Improvement Association of Japan” for a price tag of $160,000.00. He produced over 400,000 units of semen over his lifetime and was used extensively with great results for F1 production. Now considered one of the top 10 Wagyu Sires in Japan.

“Monjirou” himself was awarded he best young bull in the Fukushima Zenkyo (the All Wagyu Show held ever four years). He has many progeny throughout Japan due to his fine fat development, high meat quality, and extremely balanced calves. With an official proof of DG 0.87 kg, BMS +3.3 and REA 44 cm2.

On the maternal side, her dam FB5767 – Hisako is sired by FB2101 – “JVP Fukutsuru”, a sire renowned for his great meat qualities as reflected in all of the progeny tests done in the United States. He hails from one of the most famous cow families in Japan known as “Kikutsuru” – both his sire and dam are both from this cow family making Fukutsuru an extremely line bred animal.

Every generation of Fukutsuruʼs maternal line have produced sires for A.I. in Japan.

The grand dam, “Kanetani” was imported in WKS second shipment in 1994 and has very similar breeding to both Suzutani and Rikitani.

We are currently in the process of cloning both her and her dam.