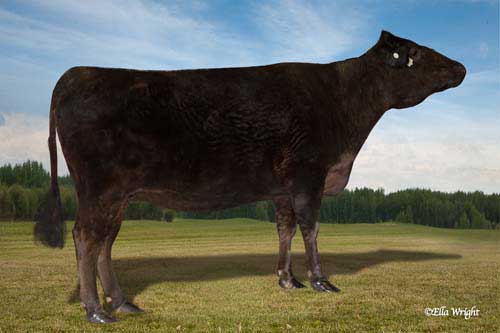 Hisako is a transmitting specialist!

“Hisako” was born on September 9, 1996 and was purchased from WKS (World K’s) Group. She was to be one of their foundation donors for the next generation of animals being produced in WKS Australia.

Sired by FB2101 – “JVP Fukutsuru J068”, a sire renowned for his great meat qualities as reflected in all of the progeny tests done in the United States. He hails from one of the most famous cow families in Japan known as “Kikutsuru” – both his sire and dam are from this cow family making Fukutsuru an extremely line bred animal.

Every generation of JVP Fukutsuru J068ʼs maternal line have produced sires for A.I. in Japan. Countless animals from this cow family have made an impact on the breed – “Dai 2 Yasutsuru Doi”, “Tanifuku Doi”, “Kamifuku”, “Yasutsuru Doi”, “Fukutsuru”, and “Shichifukujin” to name a few.

On the maternal side, “Kanetani” was imported in WKS second shipment in 1994 and has very similar breeding to both Suzutani and Rikitani. It comes as no surprise that her daughter, FB5768 – Misako was the #1 Genomic marbling animal in the breed.

Hisako currently has a number of sons coming up through the ranks including FB6198 – Michihisa, FB6197 – Michitsuru 1, and WKS Michishige. Currently WKS Michishige is ranked in the top 3 of WKS’s best F1 tested marbling bulls in Australia in a recent release in 2012.